Fairtrade is all about justice and making the right choices. Children are learning about the lives of children in other parts of the world. They are making comparisons and understanding that people around the world have similar needs and values. This learning supports our Christian ethos and also opens up many topics for higher thinking skills and discussion.

In 2013, we decided to work towards becoming an accredited Fairtrade School. We wanted to add an international dimension to our learning, involve the local community and also find a project that the children could lead themselves. In May 2014 St Peter's was accredited at the highest level for the Fairtrade Achiever Award.  So much has been achieved since then. The Award was renewed in May 2017. We were delighted with the assessors' comments which included:

" Wow - it's great to see how you've embedded learning throughout the school in a variety of topics and age groups, well done!  Your engagement with incorporating Fairtrade into the English curriculum is outstanding.... it's good to see that so much thought has gone into how best to bring dffierent elements into teaching.  The Fairtrade song is particularly innovative and overall as a school, you are committed to raising awaress of Fairtrade."  May 2017

What does Fairtrade mean to the children?

Younger children understand the meaning of the Fairtrade symbol in simple terms such as the farmers receiving a fair price for their produce. Older children are exploring world trade and investigating who makes most money from a jar of coffee or a chocolate bar. They are beginning to think about why some countries have many natural resources but remain poor, while others have no resources and yet are comparatively wealthy.

In 2017, as well as running various Fairtrade focused competitions, our Y6 pupils wrote to our local MP, Jeremy Hunt who responded by meeting up with them. He was particularly impressed with the children's knowledge and deeper thinking around world trade and committed to raising their concerns with the Secretary for International Development. 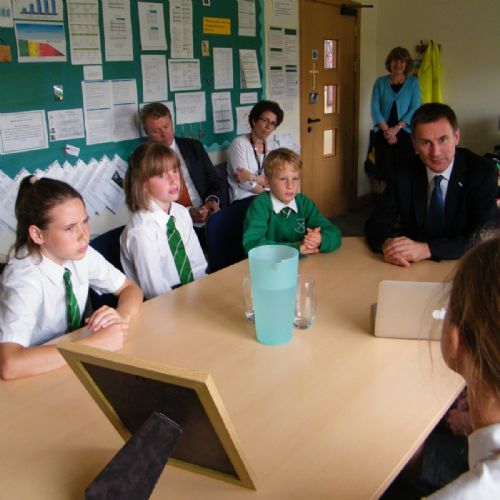