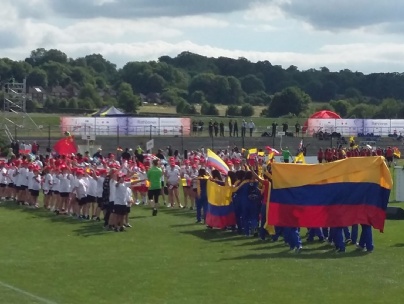 What an amazing opportunity!  As a result of our commitment to The Daily Mile and our enthusiasm to trial Lacrosse workshops, we were invited to participate in the Opening Ceremony of the Women’s World Cup, held at Surrey Sports Park on July 12th.  The event, opened by Princess Anne, was an occasion that the children (and adults) will never forget!

Our 66 Y5 children ran into the Stadium waving international flags and formed a tunnel to welcome the 25 teams from around the world, as they entered.   Many of our children ‘high fived’ the players as they paraded by - carrying their country’s flag.

After the parade St Peter’s children joined Farnham Rock Choir to perform a dance to the ELO song:  All around the World.  The song boomed out across the stadium while the crowd in the spectators’ stand cheered. It was like a mini- Olympics!  Once the performance was over, the children returned to the spectators’ stand where they had tickets for the opening match: England v Wales.

It was a long afternoon as we had to arrive for two hours of rehearsals with the rest of the performers.  Children returned to school at 8.30 - exhausted - but full of excitement and enthusiasm for Lacrosse.  As well as being totally absorbed as stars for the day, the children experienced being part of an international event alongside people from all over the world. They also heard the judges and Lacrosse officials swear their oaths to host a fair tournament and stood to sing the national anthem- what better way to feel part of a British and Global community!

The whole ceremony was streamed live –and St Peter’s has a mention. Do view below to get a feel for the atmosphere.