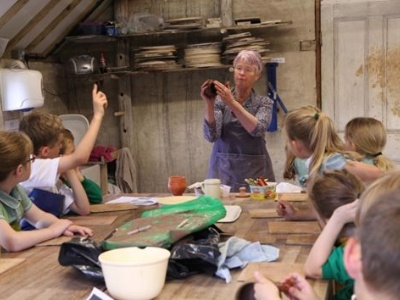 At the end of April 2016 we were awarded grants from the Ernest Cook Trust, South Street Trust and the Farnham Institute Charity towards our Potted History Project.   The money paid for the workshops and material costs for the kiln reconstruction and pot-making.

‘Potted History’ was a unique arts and history project implemented by St Peter’s C of E Primary School of Wrecclesham, on the outskirts of Farnham, Surrey. Through use of its own Forest School, engagement with local archaeologists, and workshops with Farnham Pottery (the best-preserved example of a Victorian country pottery in the country), the project aimed to develop the children in Key Stage 2’s historical and artistic understanding of pottery and how it is fired.

In order for them to fully engage with the material and ‘bring the pots to life’, a creative approach to understanding the different stages of pottery production and processes in its ‘lifecycle’ was implemented, and Potted History was thus born.

An exhibition was also held in the school for the parents, potters and local community, where the children exhibited their pots and wrote about their experiences.